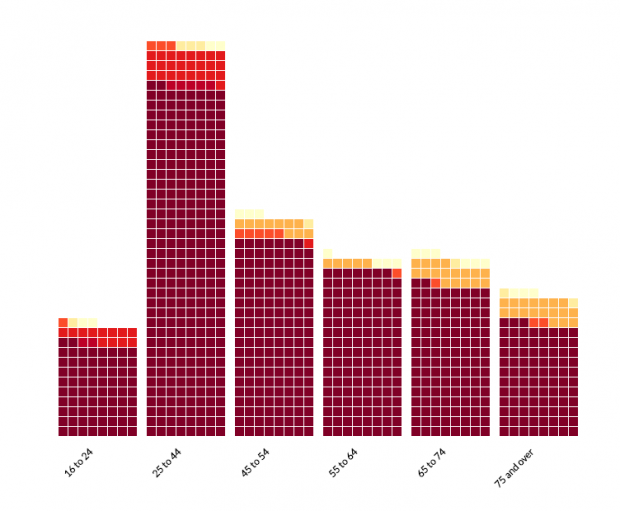 This blog post provides an update to our demographic coverage estimates based on new data collected by the Office for National Statistics (ONS).

We’re aiming for GOV.UK Verify to have 90% demographic coverage. That means 90% of people who are expected to access services through GOV.UK Verify should be able to do so. We’ve also set ourselves the ambitious target of being able to reach 90% of the UK adult population. Excitingly, we expect that once the improvements our certified companies are currently working on are completed, we’ll be able to do just that.

We’ve blogged about our work in this area before; since then we’ve been improving how we estimate our demographic coverage. It has taken longer to make some of the improvements to our service than we were expecting when we last blogged about this. As a result, we have updated our prediction to reflect improvements that we now expect to happen later in the year.

We now have better data and can make better quality estimates than before.

In order to estimate how many people certified companies can verify we need to know what evidence people have. We’re still using data from the ONS omnibus survey, but we’ve added new questions to get more detail about what kinds of documents and technology people have.

Previously, we had survey data on 12 items of evidence and technology (such as passports, photocard driving licences and bank accounts). However, there are over 50 items that can be used to prove your identity, so if we used these 12 items alone, we would have greatly underestimated our coverage.

To create a fuller picture of our demographic coverage, we had to estimate whether people had further items of evidence (such as a mobile phone contract). We needed to do this in order to model enough of the combinations of evidence used by certified companies to be representative of the overall coverage. We did this using data from a variety of other sources such as the Ofcom technology tracker. This meant that there were lots of people in our sample who we thought certified companies had a chance of being able to verify, but that we couldn’t be sure about.

So since last time, we now have survey data on a further 8 items, and only have to estimate 1 item (people’s credit reference agency files, which we cannot survey easily). Having survey data on these additional items gives us a clearer picture of what combinations of evidence people have.

The new survey data is particularly useful when it comes to groups of people who certified companies are less likely to be able to verify right now. We previously based our estimates on the age of the individual, since that was what we had the best data on. However, age isn’t the only thing that affects whether people have evidence such as a mobile phone contract; other factors like income also matter.

We were unable to account for these in our previous estimates. This meant we overestimated whether some people would have this evidence, and therefore whether certified companies would be able to verify them, by about 3%. We have since re-visited this using our new data and found that our coverage has actually improved over the last few months by about 9%.

Last time, we estimated that 73% of people aged over 16 could be verified by our certified companies. We now estimate that at least 79% of the adult population, and 88% of people in employment, have enough evidence to successfully verify their identity.

That’s an improvement, and we can be more confident of these results. Our certified companies are still working to implement all the improvements we predicted last time and we now estimate that our they will be able to verify 87% of the adult population by the end of this year, and 92% by April 2017, exceeding our 90% target.

We’ve also built a new tool which shows our coverage of a representative sample of 1,000 individuals both now and in the future. This tool allows you to explore the data for yourself to find patterns in who certified companies are more and less likely to be able to verify users.

Who’s most likely have the evidence certified companies need to verify them?

We have found that younger people (aged 16-25) in particular are less likely to have the evidence needed for certified companies to verify them at present: we estimate that 50% of people in this age bracket have enough evidence to use GOV.UK Verify. The main reason for this is that these people are less likely to be performing the kind of financial transactions - like paying off a mortgage - that generate evidence of activity history needed for for element E of identity verification.  However, new types of evidence for activity history mean our coverage is set to grow to 88% by the end of 2016 and to 96% by April 2017.

People in the over 75 age group are also less likely to be able to use GOV.UK Verify at present. This is because they are less likely to have the kind of evidence, like a photocard driving licence or a passport, needed to assert an identity and prove that it exists for elements A and B of identity verification.

Some users are simply less likely to have the kinds of financial products that certified companies currently use as evidence of activity history. For example, there are overlapping groups of people with low or no income, people who are unemployed, people with no formal qualifications, and people who are renting accommodation from their local authority or a housing association. ONS data shows that people in these groups are also less likely to have a smartphone or tablet - technology which would allow them to scan an identity document as part of the GOV.UK Verify process so that certified companies can be confident that it is genuine.

We’re still looking into which of these demographic characteristics are the most significant in explaining why people are less likely to have the evidence needed to use GOV.UK Verify using logistic regression.

We want GOV.UK Verify to work for as many users as possible and we’re aiming to be able to verify the identities of 90% of the UK adult population. That means we need to improve our coverage of the groups mentioned above. Our biggest challenge at the moment is activity history, where the forms of evidence certified companies currently use only covers about 82% of people.

All of the certified companies are adapting quickly. This adaptability - investing in working on a wide range of solutions that meet the needs of new demographics and innovation resulting from competition - will improve GOV.UK Verify for our users.

We’ve got some big improvements planned, including new types of evidence and new ways of proving activity history. These will mean certified companies have access to evidence for activity history for almost everyone in the UK. If almost 100% of people have enough evidence to prove their activity history, then we will be able to achieve our goal of being able to verify over 90% of the adult population.

Subscribe to the blog to keep up to date with GOV.UK Verify's latest developments.